SHAMS” Center’s monthly report: the occupying state has targeted (156) households and facilities throughout the month of June. 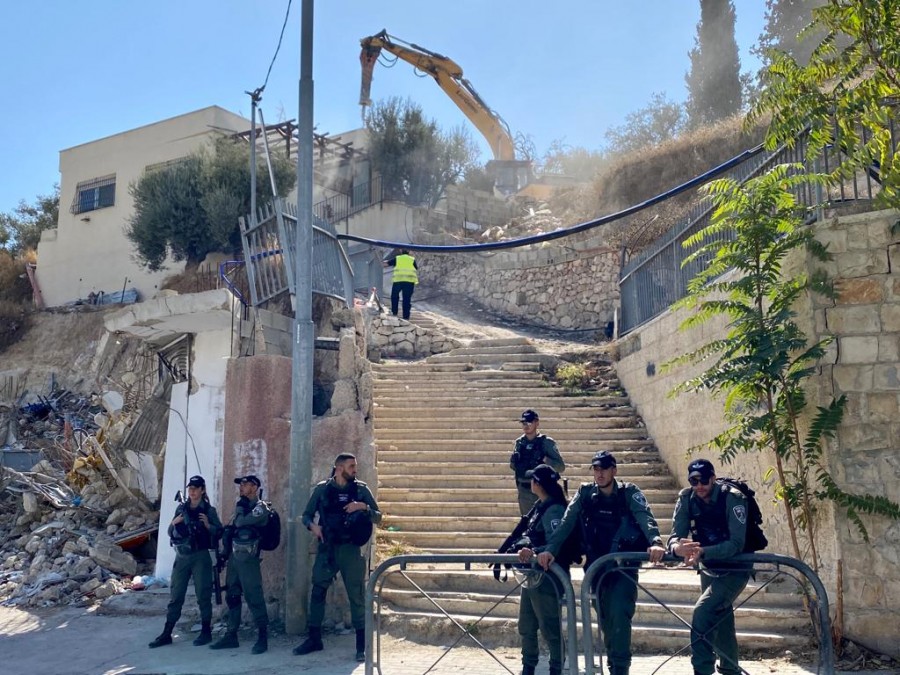 Ramallah: The Human Rights and Democracy Media Center “SHAMS” has released its monthly monitor report covering the month of June of 2021 on processes of demolition, confiscation, forced eviction and seizure carried out by “Israel,” the occupying power in the occupied Palestinian territories and targeting Palestinian facilities, whether they are religious, touristic, industrial, commercial, formal, agricultural or particularly those pertaining to housing. The report is titled “Monthly Monitor Report on Demolition Processes and Israeli Violations against Palestinians’ Households and Facilities.” “SHAMS” Center periodically releases specialized monthly, biannual, and annual monitor reports covering these particular kinds of violations in addition to others.

This monitor report’s methodology is based on observed field data conducted by “SHAMS” Center’s staff members and researchers, who monitored and recorded Israeli violations against Palestinian facilities throughout the period 1/6/2021-30/6/2021 in all of the West Bank’s governorates for the purpose of the releasing this monitor report. They later analyzed, disassembled and finalized them in the form of tables all in accordance with a comprehensive qualitative and quantitative indicators.

According to “SHAMS” Center, the occupation authorities targeted throughout the month of June (156) facilities owned by Palestinians either in the form of demolition, confiscation, eviction, or distribution of notices that announce similar practices in the future.

The most prominent violations came in the form of demolitions, which took place in the case of (59)facilities. Out of those, the owners of (7) facilities were forced to self-demolish their own property as they were threatened with fines and jail-time, and (2) properties were women-owned. In a community occupied by Al-Ka’abna Bedouins in the region of Al-Mu’arrajat to the north of the city of Jericho, the occupation forces demolished (10) tents and (9) tin units owned by Palestinians, including a housing tent and another tent used as a sheep barn both owned by the citizen Alia Ibrahim Muhammad Al-Ka’abna (a woman). In addition, the occupation forces confiscated in the Khallat Al-Nahla region, located near the village of Wadi Rahhal in the Bethlehem governorate and adjacent to the settlement of Efrat, a trailer park owned by one of the citizens residing there.

Regarding demolition notices, the occupation forces notified (96) facilities of future demolitions, confiscations, or forced evictions. The majority of those facilities were housing units, in addition to others that were commercial, agricultural, and medical facilities

Regarding notices that notify residents of demolitions, confiscations, evictions, orders to suspend construction activities and other practices that deprive Palestinians of their right to build and invest in their facilities, (96) cases have been recorded in different areas. These notices point to the future concentrated trends of the Israeli violations against Palestinians. The governorates of Nablus and Hebron were the two areas where that largest number of cases was documented.

The third indicator pertained to the targeted population since the violations against Palestinian facilities do not take place in isolation of the population. The number of targeted residents throughout June was (92) individuals at the least, including (3) children, and (1) woman according to the information that we managed to gather.

Surveying the pretexts employed by “Israel,” the occupying power, in an attempt to legitimize its crimes, we find that all of the (59) demolished facilities this month were demolished under the pretext of unauthorized construction in areas (C), which are under Israeli control and yet populated by Palestinians.

As for delivered demolition notices, (13) facilities were targeted under the pretext of former Jewish ownership of the land upon which the facilities (or in the case we’re about to present, an entire neighborhood) was built. In this regard, The Israeli occupation forces renewed demolition notices to the homes of 13 Palestinian families in the Al-Bustan neighborhood in Silwan in Occupied Jerusalem in central West Bank for a new period of 21 days.

The authorities threatened to demolish the homes if they are not self-demolished by the end of this time period and then charge the residents with the costs of demolition. In Silwan, around 100 Palestinian families have been under a constant threat of demolition for years in order to make way for the construction of a “national park” for Israelis in their place.

(1) other facility received a final demolition notice as a part of a collective punishment policy that the Israeli army follows against the families of individuals it accuses of committing operations against its Jewish citizens (exclusively). An Israeli occupation court approved an order to demolish the home of prisoner Muntasir Shalabi in the town of Turmus Ayya to the north of the city of Ramallah. Shalabi is accused of carrying out a drive-by shooting at the Za’tara Checkpoint about 2 months ago, which led to the death of a settler and the injury of another. The court approved the order after rejecting an appeal filed by the family.

The rest of the facilities that received notices of demolition, suspension of construction, confiscation, or forced eviction (82 facilities) all came under the pretext of unauthorized construction in area C.

As for facilities that have been confiscated or seized under the pretext of the lack of a permit, The occupation forces confiscated in the Khallat Al-Nahla region, located near the village of Wadi Rahhal in the Bethlehem governorate and adjacent to the settlement of Efrat, a trailer park that is owned by a citizen residing in the area.

The last indicator focused on “self-demolition,” which represents a particular type of systemic and concentrated subjugation in which Palestinians are forced to demolish their own homes and facilities under the threat of hefty fines. Throughout June, the number of facilities whose owners were forced to self-demolish under the pretext of unauthorized construction was (7) out of (59) that were demolished overall. These facilities were (5) houses and a residential room in Jerusalem and an agricultural room in the Um Rukba region near the town of Khadr.

The occupation forces coerced in Al-Thawri neighborhood in the city of Jerusalem the citizen Hamza Mahmoud Abu Sel’oum into self-demolishing a 32-m2 residential room attached to his home under the pretext of unauthorized construction. The authorities had notified Hamza earlier that he would be charged with heavy fines if the demolition were to be carried out by the Israeli authorities themselves.

In the town of Al- Isawiya, the occupation forces coerced the citizen Abdulrahman Ahmad Ubaid into self-demolishing his 3-floor house under the pretext of unauthorized construction. The authorities had notified Abdulrahman earlier that he would be charged with heavy fines if the demolition were to be carried out by the Israeli authorities themselves.

In the Um Rukba region near the town of Khadr, the occupation forces coerced the citizen Muhammad Ahmad Salah, a resident of the town, into self-demolishing an agricultural room he owns. The authorities had notified Muhammad earlier that he would be charged with heavy fines if the demolition were to be carried out by the Israeli authorities themselves.