“SHAMS” Center issues a report on the status of death penalty in the Palestinian territories: in 2017 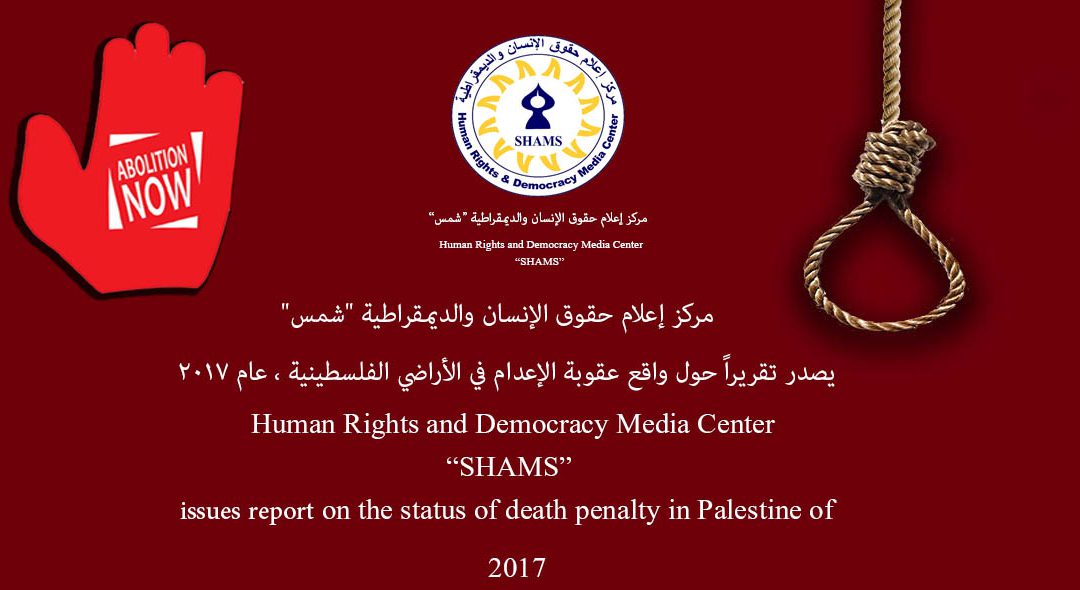 “SHAMS” Center issues a report on the status of death penalty in the Palestinian territories: in 2017

In 1994, Palestinians welcomed the inception of Palestinian National Authority (PNA) in order to manage their civil affairs in the West Bank and Gaza. Also Palestinian president Yasser Arafat issued a decree (1) of 1994 to keep working on laws valid preceding June 5th of 1967 in the Palestinian lands,  earlier to occupying west Bank and Gaza Strip by Israel.

In 2012 UN General Assembly voted to recognize Palestine as non-member state, while in April 1st and December 31st of 2014, Palestine has acceded to (35) international conventions and treaties including the Universal Declaration on Human Rights, International Covenant on Civil and Political Rights, International Covenant on Social and Economic Rights besides Convention against Torture and Other Cruel, Inhuman or Degrading Treatment or Punishment. The accession to the majority of these conventions represented the enhancement for Palestinian human rights movements. It was believed among human rights organizations that accession to such treaties will be reflected positively on the status of human rights in Palestine and will put an end to violations against the right to life in particular however, nothing has changed on the ground.

Information and statistics on the capital punishment in Palestine

6 penalties were implemented in 2017 (detailed information are mentioned in annex No. 1)

32 death penalties were issued in 2017 among which (12) sentences were issued to affirm previous judgments. Affirmation decisions were made by civil and military courts (detailed information are mentioned in annex No. 2)

“SHAMS” Center mentioned that “we in Palestine are applying inconsistent legal combination of laws that punish with death penalty, which are not Palestinian laws basically except for the Penal Revolutionary Law no. (5) of 1979 as the following:

Capital punishment violates against an essential human right since life is a gift, and it is irreversible once executed.  It doesn’t represent a public deterrent so; it is nothing but a form of violence not a solution for it.  Besides, the center explained that opposing the implementation of death penalty in the Palestinian territories results from the belief that there are different difficulties pertaining to it.

So, prosecuting citizens before military judiciary is a constitutional breach. Furthermore, article (109) of the Palestinian Basic Law which grants the president a constitutional right to sign or reject death sentence “A death sentence pronounced by any court may not be implemented unless endorsed by the President of the Palestinian National Authority”. As well as articles (408) and (409) of Criminal Procedures Law no. 3 of 2001, stipulate that death sentences shall not be implemented without ratification of the present of the state.